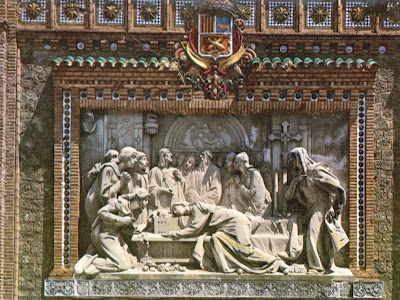 The Escalinata is a staircase that climbs the hill from the railway station to the city centre. It is quite a recent addition to the city's fine architecture but quite splendid for all that - it was designed by José Toran in 1920. It is decorated with ceramic tiles and is in mock Mudéjar style. The Escalinata includes a beautifully carved embossed relief depicting a scene from the legend of the Lovers of Teruel.

SPANISH IMPRESSIONS
PHOTOGRAPHS OF SPAIN
POSTCARDS FROM SPAIN
YOU COULDN'T MAKE IT UP!
A GRUMPY OLD MAN IN SPAIN
BITS & BOBS
SPANISH EXPRESSIONS
SPANISH ART
BOOKS ABOUT SPAIN
Posted by Unknown at 18:29 No comments:


Muralla de Jayrán' - the walls that were built to enlarge the city's defences in the 11th century. They run all the way to the 'Cerro de San Cristóbal' - the hill of Saint Christopher.

SPANISH IMPRESSIONS
PHOTOGRAPHS OF SPAIN
POSTCARDS FROM SPAIN
YOU COULDN'T MAKE IT UP!
A GRUMPY OLD MAN IN SPAIN
BITS & BOBS
SPANISH EXPRESSIONS
SPANISH ART
BOOKS ABOUT SPAIN
Posted by Unknown at 18:22 No comments: 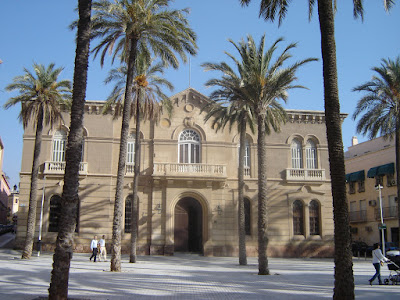 The 'Palacio Episcopal' or Archbishop's Palace was built in the nineteenth century when the upper classes started erecting the grand stately homes and palaces outside the old walled city of Muslim Almería. 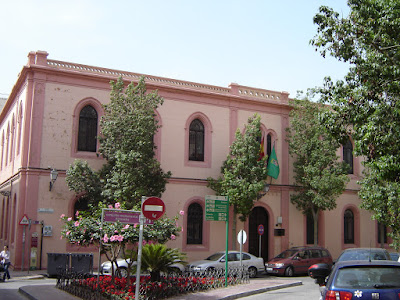 In the mid 19th century, church lands were disentailed so nuns had to adopt other ways of earning a living. Education offered a means of economic survival. To this end, the 'Convent school Puras' was built during the period 1885 to 1889. I think it is another delightful building with its cream-coloured façade and pink arches. Today, the building houses the 'University of Distance-Learning'. That is what I like about Almería - tasteful old-fashioned buildings housing 21st century businesses.

SPANISH IMPRESSIONS
PHOTOGRAPHS OF SPAIN
POSTCARDS FROM SPAIN
YOU COULDN'T MAKE IT UP!
A GRUMPY OLD MAN IN SPAIN
BITS & BOBS
SPANISH EXPRESSIONS
SPANISH ART
BOOKS ABOUT SPAIN
Posted by Unknown at 17:22 No comments:

Plaza de la Constitución - also called the Plaza Vieja or Old Square. This 17th century arcaded square is really rather splendid. It is entered via narrow alleyways and in the centre are palm trees and a commemorative monument in remembrance of a group of liberals who lost their lives in a revolt in 1824. 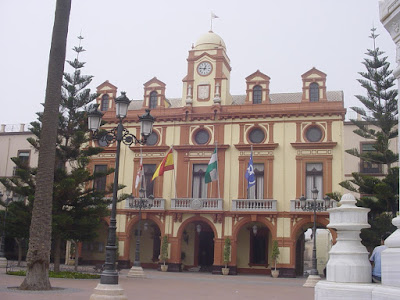 Cherín - a village in the Alpujarras 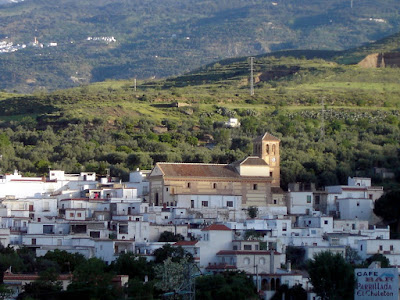 ...
Cherín is a small village in the Alpujarras. It has an oil mill and many orange, mandarin and olive groves as well as almond trees.
...
for more photos of the this delightful area of Spain click on...

almond blossom in the Alpujarras 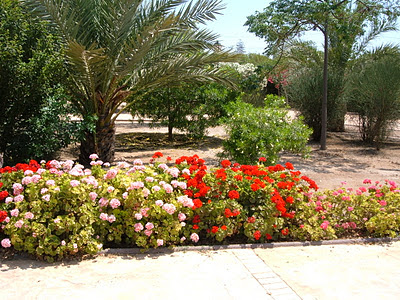 Venta Gaspar is a small barrio located near La Cañada and about 7 km from the city of Almería. In 2010 it had 442 inhabitants. The delightful Parque El Boticario is situated nearby.

This botanical garden is divided into four areas:


Benaoján is a pretty village that I first encountered when I travelled on the Algeciras to Ronda railway.

Near the railway station there is a footpath to Cueva de la Pileta - a cave with primitive rock paintings of animals that, apparently, date from around 25,000 BC.

Just above the village there is a mirador where spectacular views can be enjoyed - poplar, willow and oleander at the bottom of the valley; evergreen oak, peonies, thickets of kermes oak, retama and broom on the hillside; gorse, thyme and sage beneath jagged outcrops of limestone on higher ground and probably the odd vulture or two circling above. There are about 300 griffin vultures in the Serranía de Ronda, which is a tribute to the local conservationists as during the 1960's the birds were almost extinct.

Gaucín (one of the 'White Towns of Andalucía') 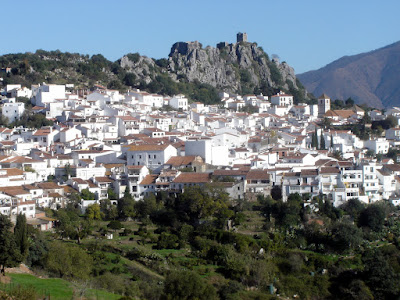 In the heart of the Serranía de Ronda is Gaucín, a typical pueblo blanco with whitewashed houses and a maze of narrow streets. The village commands sweeping views to Gibraltar and the of . 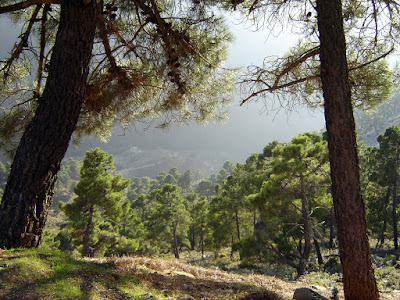 There is a very good reason why this area is so green - rain! Grazalema is the wettest place in Spain. Yes, less than two hours drive from the Costa del Sol there is a place that gets more rain than anywhere else on the Iberian Peninsula! Warm clouds full of moisture from the Atlantic are forced upwards by the successive mountain ranges. This cools them resulting in condensation and rainfall.
Posted by Unknown at 17:33 No comments:

La Roza is a recreation and camping area situated in the Sierra Nevada National Park. La Roza is only a few miles from Abrucena, one of the towns in the Alpujarra Almeriense.
Posted by Unknown at 17:19 No comments:

About 1 kilometre north of Laujar de Andarax is 'El Nacimiento' - a delightful area of waterfalls, picnic areas and places to walk. My wife and I usually go there in Spring and Autumn on weekdays and, mostly, we have the place to ourselves. It is a haven of peace and tranquillity. Nacimiento means 'birth' and it is here that the Río Andarax starts its journey to the sea near Almería. 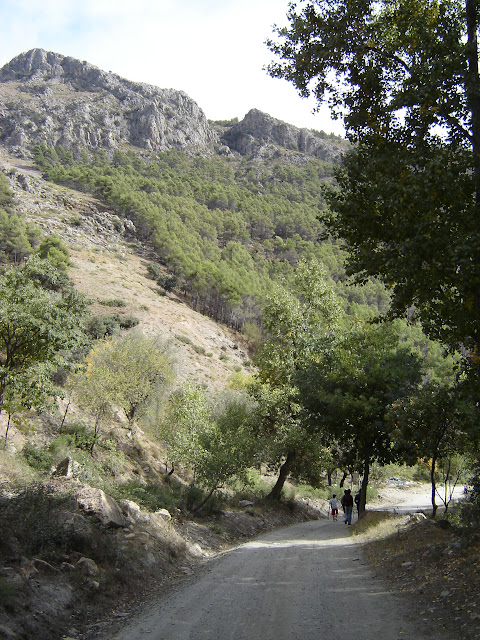 One of the delights of the Albaicin area of Granada is its carmens (carmenes in Spanish). They are hillside townhouses with private walled gardens. They originated in Moorish times and their design expresses the Islamic idea of the inner paradise, a reflection of heaven. They gardens usually have mosaic floors, shady grottos and lush flora usually comprising rose, honeysuckle, palm, wisteria and, this being Granada, pomegranate. (granada is the Spanish word for pomegranate). Of course, these delighful townhouses have Alhambra views.

Mijas (a pretty village near the Costa del Sol)

A favourite spot of mine is 'La Muralla' – a park with balconies from where one can view the coast below. It is a quiet oasis away from the bustle of tourists, yet is only a few minutes walk from the centre – just up past the Plaza de Toros.


Other blogs by Robert Bovington: 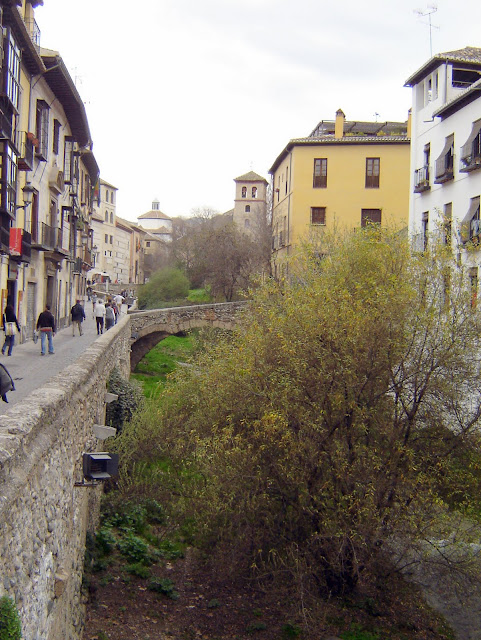 ..
The Carrera del Darro is a picturesque street that runs from the Plaza Santa Ana to the Paseo de los Tristes.

It is presumably called the Carrera del Darro because the River Darro runs alongside.

In Roman times the river was called aurus meaning 'River of Gold' - in those days panners made meager living searching for the precious mineral in the riverbed. 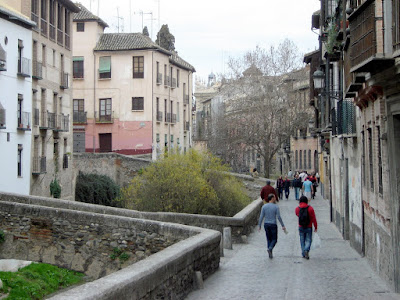 The tower in this photo is the Torre de la Vela. The bell was used by the Arabs to announce disasters. From this privileged position a vast expanse of territory could be seen including the Vega of Granada.

The tower was, therefore, critical for defence and surveillance.
Later, the Christians used the bell to strike the hours and to announce the time that farmers could irrigate their fields. 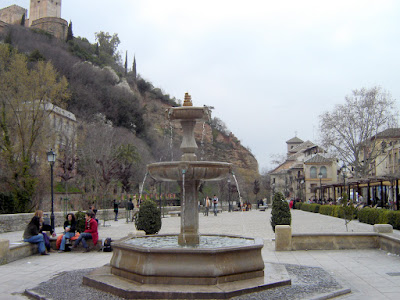 Paseo de los Tristes translates as "walk of sorrows" - before the motor car, the inhabitants of Granada carried their dead along this road and up the Alhambra hill to the cemetery.
Posted by Unknown at 17:47 No comments: 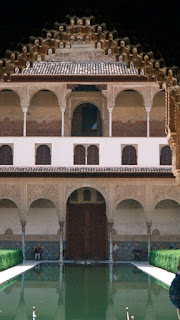 Myrtle bushes border the pool in this delightful courtyard. Perhaps that is why it is called the Patio de los Arrayanes (myrtles).
Posted by Unknown at 17:03 No comments: 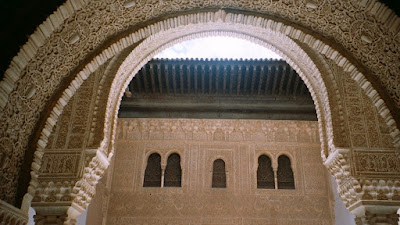 ...
Through this beautiful arch the Comares Palace can be seen. The Cuarto Dorado is, in fact, a courtyard leading to the patio de Machuca.

...
The famous Lion Courtyard dates from the time of Mohammed V. The 11th century fountain is supported by 12 lions carved out of stone. This beautiful patio has recently been renovated. 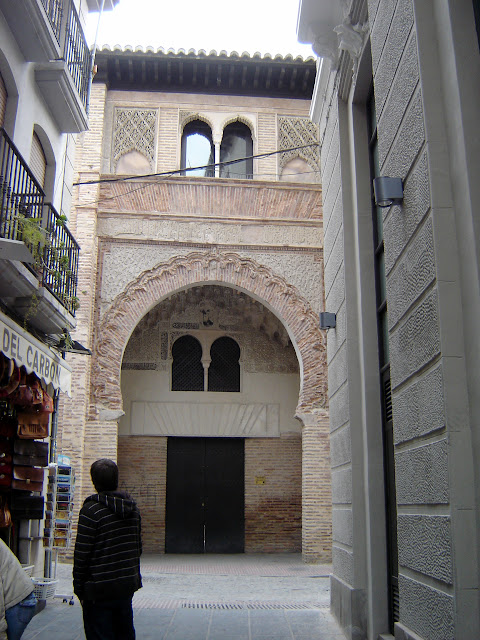 ...
The Corral del Carbón is one of the few examples of public buildings dating from the Moorish period to have survived to the current day. It was erected at the beginning of the 14th century, under the rule of the Nasrid dynasty, and it was part of the original structure of the moorish medina. It was originally a corn exchange and as an inn for visiting traders and merchants.
After The Reconquest, it was used by coal merchants and its name changed to the Corral de Carbón. Later, in the 16th century, it was used as an open-air comedy theatre. Today, it still serves as a place of entertainment - occasionally theatre and flamenco concerts are held in the courtyard. It also houses  the Provincial Delegation of Culture of the Junta de Andalucía and the Orquesta Ciudad de Granada.
Posted by Unknown at 18:10 No comments: 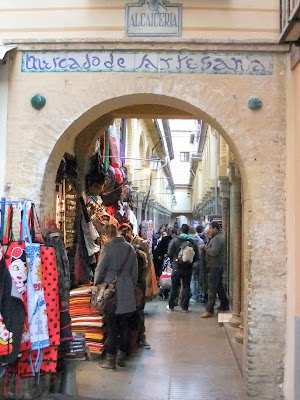 Located next to the Cathedral, the Alcaiceria is a maze of narrow alleyways with a distinct Moorish feel. It was formerly the Moorish silk market.


The Madrasah Palace is part of the University of Granada. The building was founded by King Yusuf I of Granada in 1349. It is located in the precincts of the Cathedral.

The Chancilleria was formerly the chancery but the building now houses Andalucia's High Court of Justice.
Posted by Unknown at 18:35 No comments:


...
The Plaza de Isabel la Católica is dominated by a rather impressive monument - the Monument to the Santa Fe Agreement. It is the work of sculptor Mariano Benlliure and depicts Columbus presenting his plans to Queen Isabel.


...
Diego de Siloé was a very famous and prolific architect and sculptor. His early works were principally carried out in his home town of Burgos - the gilded staircase in Burgos Cathedral being just one of many of his beautiful creations. He was the primary architect in the construction of a number of cathedrals including Granada's. He did quite a lot of work in Granada including the planning of this church - Iglesia de Santa Ana y San Gil, a 16C church that stands in the Plaza de Santa Ana.
Posted by Unknown at 17:28 No comments: