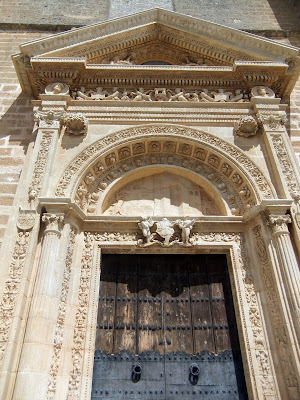 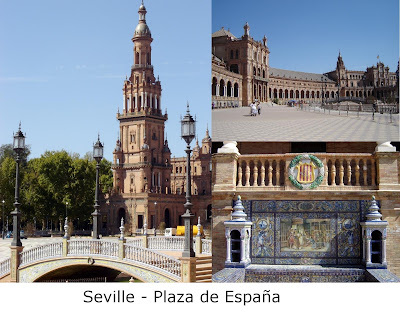 The Plaza de España is a magnificent square - sorry - a magnificent semicircular piazza that was designed as the centrepiece for the Latin American Exposition of 1929. Two hundred metres wide, it is almost entirely covered with glazed tiles that depict historical scenes and pictures of other Spanish related subjects. 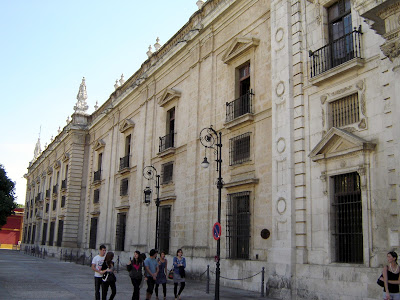 The Fábrica Real de Tabacos was the original tobacco factory - the one immortalised in the opera Carmen. Nowadays, it is part of Sevilla University. When the original factory was built in 1725 it was the second-largest building in Spain after El Escorial! It is an imposing Baroque and Rococo building. 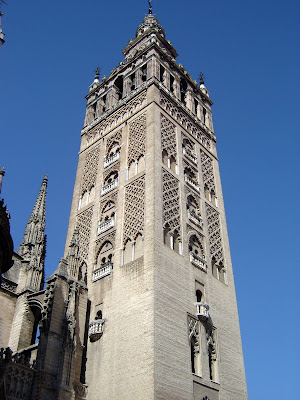 La Giralda is one of Sevilla's most famous landmarks. It is part of the cathedral complex but it is a beautiful monument in its own right. It was originally built as a minaret in the 12th century but the Christians turned it into a bell tower. It stands in the Patio de los Naranjos - so named because of the orange trees situated in this delightful courtyard.

Olvera - one of the White Towns of Andalusia 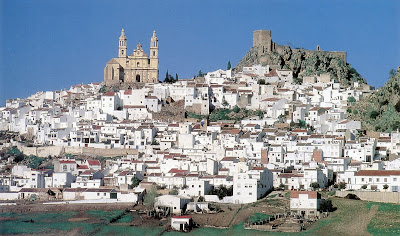 A huge neoclassical church looms over the white houses of Olvera which is yet another town that enjoys a spectacular setting. The Iglesia de la Encarnación has two bell towers and was built on the ruins of a mosque. Next-door is the 12th-century Almohad castle that formed part the defensive network of the Nasrid kingdom. Alfonso XI conquered the town in 1327.

Benaoján - a village in the Serranía de Ronda


Benaoján is a pretty village that I first encountered when I travelled on the Algeciras to Ronda railway. Near the railway station there is a footpath to Cueva de la Pileta - a cave with primitive rock paintings of animals that, apparently, date from around 25,000 BC. Just above the village there is a mirador where spectacular views can be enjoyed - poplar, willow and oleander at the bottom of the valley; evergreen oak, peonies, thickets of kermes oak, retama and broom on the hillside; gorse, thyme and sage beneath jagged outcrops of limestone on higher ground and probably the odd vulture or two circling above.
There are about 300 griffin vultures in the Serranía de Ronda, which is a tribute to the local conservationists as during the 1960's the birds were almost extinct.

Zahara de la Sierra - one of the White Towns of Andalusia


Zahara de la Sierra can be seen from miles away because it is situated in one of the most dramatic locations of all the White Towns. Its 13th-century Moorish castle stands high on a rocky outcrop overlooking the sugar-cubed houses of the village that also enjoys a hilltop setting.
The village was built by the Moors in the 8th century and was an important stronghold of the Nasrids until the Christians captured it in the 15th century.
There is a fine church - the Baroque Iglesia de Santa María de Mesa that was built in the 18th century.
Zahara de la Sierra has been declared a National Monument. 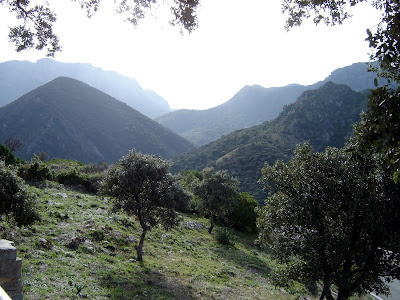 The road between Grazalema and Zahara de la Sierra is spectacular. It winds its way up to the Las Palomas Pass and there are sharp bends and sheer drops on the way. The views from the top are awe-inspiring with rugged mountains, green wooded valleys and golden fields. 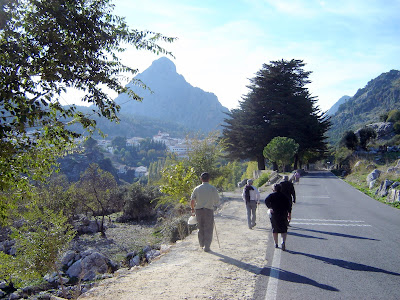 The approach to the town of Grazalema is dominated by the massive Peñon Grande which rises to over 1000m above the town which itself appears to be suspended from a bare cliff face when viewed from below. 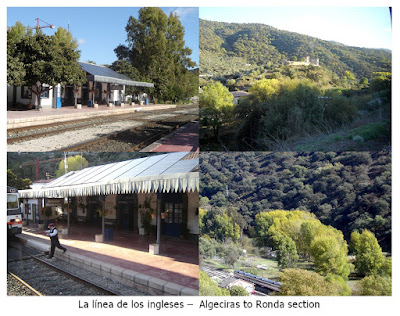 La línea de los ingleses - the 'English Railway' is a trip through some of the most beautiful countryside in Andalucía. The little three-carriage train winds its way past some of the attractive 'white towns' of the region and through the spectacular scenery of the Los Alcornocales and Grazalema Natural Parks.

The most important building in Tarifa is the Castillo de Guzman. This 10th-century medieval fortress is known as the Castle of Guzmán the Good. It was named after Alfonso Pérez Guzmán who in no way would have won the 'Father of the Year' award - apparently, he threw down his dagger to besieging Moorish forces for them to execute his son who had been held hostage. He did this rather than surrender the city to the marauding Arabs.
Other blogs by Robert Bovington: